Back in February 1990, I won second prize “Pattern of the Month” in Crochet World Magazine for my French Clown Hand Puppet pattern. For those of you who are interested, I’ve decided to post the pattern here! Please forgive the scanned images, that was a lot of directions to type! 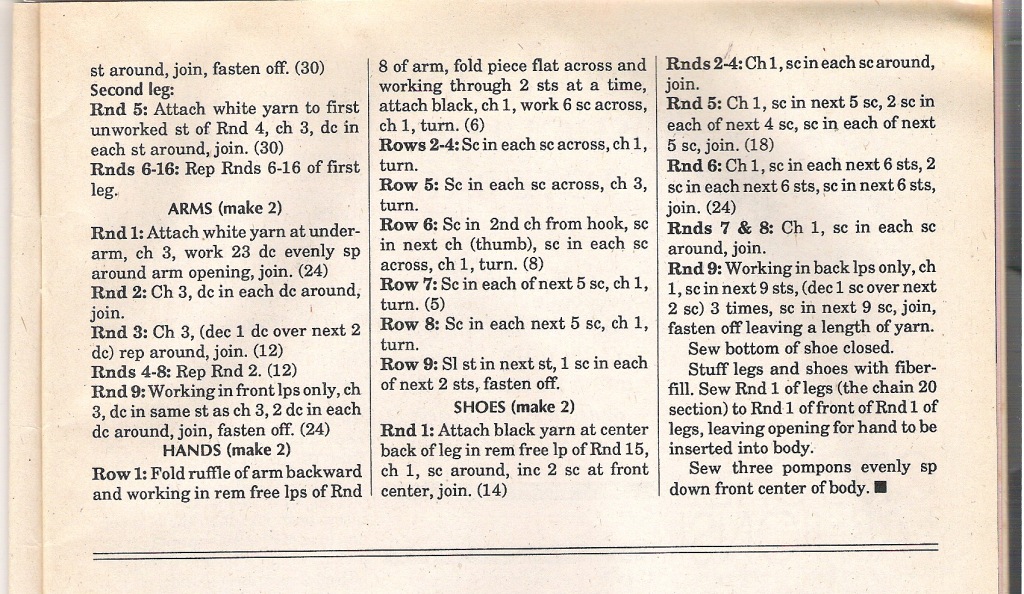 Back in 1983 I designed a  costume for my daughter who wanted to be a Cabbage Patch Doll for Halloween. I crocheted this hat with braids to resemble her own Cabbage Patch Doll. The following year I submitted the pattern to a national magazine for publication. In Feb/Mar 1985 it was published in Annie’s Pattern Club magazine.

The pattern instructions isn’t an interesting read (unless maybe you’re like Dumbledore who enjoys reading knitting patterns.) but I’m including it here for any one who has the interest in making one.

RND 27: Working this rnd in both loops, ch 1; for loop stitch (lp st) insert hook in st, wrap yarn clockwise 2 times around finger, insert hook from left to right through all loop on finger,  pull lps through st, drop loops from finger, yo, pull through all lps on hook, lp st in each st around, join with sl st in first lp st. Fasten off.

Cut 36 piece yarn 30″ long, fold in half, sew fold to round 10 on side of hat. Separate strands into 3 even sections and braid. Place rubber band on end of braid to secure. Cut ribbon into 4 equal pieces. Tie ribbon at top of braid and around rubber band.

Note: That isn’t my daughter in the picture. My pictures of her in the hat were too small and now she’s too big to wear it.